One of the challenges of building small mobile web apps without a traditional back-end server is storing global state in a secure way. In my exploration of ways to store state I decided to build a very simple multi-player social app that allows players to participate in a simple photo challenge game. The game author specifies a photo caption and then invites friends to add photo responses that most creatively match the caption. The second feature is to allow people to vote on their favorite photo responses. 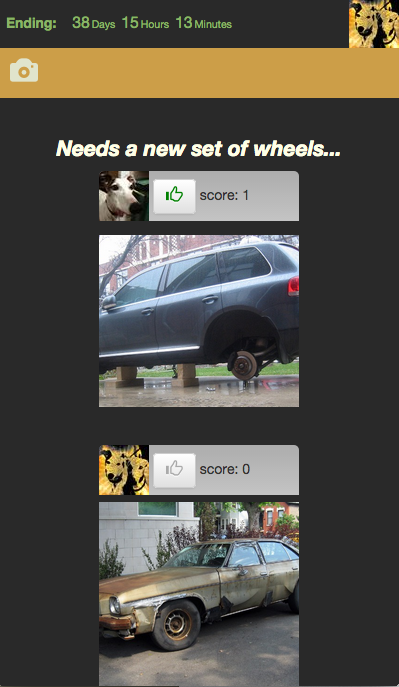 Such a game would typically require a server to support a few key behaviors:

There are many challenges to running a back-end server to support an app, including configuration, maintenance, and security. In the ideal case one could build all sorts of small fun apps without having to manage any such servers. With the Photo Caption Challenge app I explored using the following services instead of running an app server.

IAM policies can specify an identity provider like Facebook to make sure to limit access based on current session identity information, and not the API request data. For example you can configure an IAM policy for S3 that secures S3 bucket privileges so that sub-folder privileges are connected to user identity. In the case of "Photo Challenge" the policy states any logged in Facebook user running the Photo Challenges app will be able to view photos in any sub-folder, but only upload, modify, or delete items that are in a folder that matches their identity provider's assigned userid. It also states that any user can create a folder in the bucket as long as the folder name matches their identity provider's assigned userid.

The Amazon IAM policy for DynamoDB works similarly. Any logged in Facebook user running the Photo Challenges app will be able to query the DB index for the current list of photo entries, but can only add/delete records that have a userId value that matches their identity provider's assigned userid. Thus a user can't spoof who added the record, it is connected to their userId or it is rejected by the IAM policy assigned to the DynamoDB table. For more information see Fine-Grained Access Control for DynamoDB.

In Mobile Real Estate App and Spreadsheet Driven Web Apps I described a technique for using a Google Spreadsheet to provide web application data, but this works best when the application data is read only. For an app that requires both read, write, and query transactions, a database like DynamoDB is a great solution.

Like many examples on this blog, I built this app using poggr.com because poggs are incredibly flexible and require zero configuration. Use this app at www.po.gg/peJE7qM0YUl or if you have a poggr account you can clone this pogg and use its configuration tool to set up Facebook, S3, IAM, and DynamoDB and have your version of the game running in less than 5 minutes. If you don't have an account you can still check out the pogg's README to learn more about how it was build and view the source documents.