I decided to try getting Apple Notification Center Service (ANCS) working with the RedBearLab BLE Nano, and this post describes one way to get the Nordic ANCS demo running on a BLE Nano. This post shows how to get an ARM development environment and toolchain up and running on OS X in order to develop apps for the Nordic BLE SoC's (e.g. nRF51822 based boards like the BLE Nano).

Ever want to see that last iPhone message without checking your phone. It is actually fairly easy to create a secondary message display using an Arduino, BLE, and an LCD display to conect to the Apple Notification Center Service on your iPhone.

I have started testing the ESP8266 as an inexpensive WiFi enabled IoT device platform. I will added specific how-to notes later but wanted to capture a few items from my initial experiments.

One of the challenges I have had in handing out prototype devices is keeping the software up to date. Solutions like resin.io do a nice job of deploying bundler images onto devices like the Edison. The primary issue I had was the overhead of pushing bundler images around when the only thing that was changing was the node app. It seemed easier to just use git and npm to handle the updates. I may go the resin.io route later, but this early in dev and testing the git route seems simpler.

I am using an accelerometer in my most recent device to capture gesture and orientation information, as the device itself has no traditional user interface. Since the device is running a node.js app to capture data and push it to a cloud service the first prototype required a quick solution to getting data from an MPU.

I have been building a few prototype devices with the following parts:

I built a handful of prototype devices using Intel Edison boards to hand out to testers, but one challenge is each tester will bring the devices to their own Wi-Fi environment (home, work, etc).

Setting Up a New Intel Edison 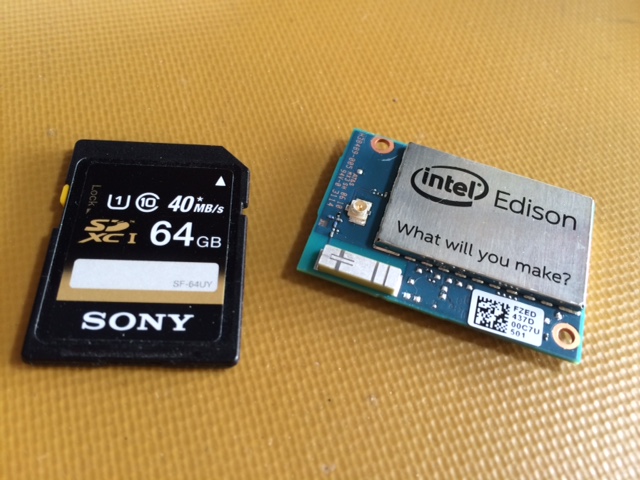 The Edison is a tiny and amazing computer, and ideal prototyping tool for wearable and IoT experiments. Here are the steps I am currently following to set up the Edison.